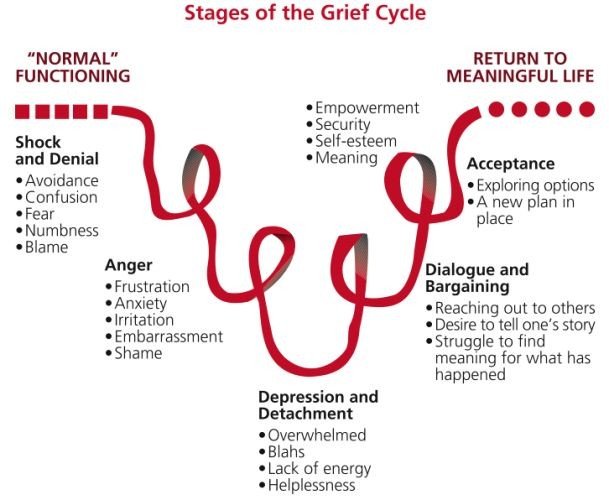 I have had quite a few face offs in my life already between grief and my hitch hiker ‘A’.

I know that its a right of passage as you get older that people will pass away and leave you.

Grief is associated with losing something or someone where a bond or affection has been formed.

You can grieve for many different reasons and because of this you can not define grief in one way.

I’ve felt grief when every single one of my hamsters, rabbits and guinea pigs died (there were alot!)

I’ve felt grief at the end of a relationship. I always struggle with the concept of relationships. You give yourself to someone, you are in eachother’s lives everyday, you share affection (and bodily fluids) and you trust them then one day – GONE (there haven’t been alot of these!)

The first time ‘A’ met the loss of a parent it buggered off on a long vacation and the asshole hitch hiker was sent in ‘A’s place. (The Affair )

The second time ‘A’ met the loss of a parent it brought reinforcements and went kamikaze on my ass and the only option I had was to surrender. (Current situation)

The doctors have recommended I have bereavement counselling, that there was a 3 month waiting list however I have been on the list since April 2017 and the last time I chased it up I was number 23 in the queue so I should get seen around April 2018. (I find this absolutely unacceptable)

My grampy died of lung cancer when I was 20 years old; up until that point in my life the only people I could depend on were my grampy and my mum so this was a hard time for me. (My previous blog post The Affair touches on this)

My grampy got diagnosed in the November but we quickly found out it was very aggressive and chemotherapy wouldn’t help, it was simply about quality of life now. Looking back I never asked or was told how long my grampy had left, he would say he would fight it and not to worry and I would believe him.

My grampy had never let me down in the past.

Sadly by the following April he had got a lot worse and everyone was saying there goodbyes. (I wont share what our goodbye was because its a personal, precious memory between myself and my grampy)

On April 14th at around 5pm my grampy passed away surrounded by all his children and me. He wasn’t dead for more than 10 minutes before the witches were stripping him of his jewellery. (A gold necklace that I had handmade a ‘D’ on, a gold wedding ring and a gold ring with the initial ‘D’ on it)

I feel like I set up camp in this phase for 6 years. My asshole hitchhiker joined me and ‘A’ went off on vacation. I felt numb and detached and that was my personality for over 6 years. I felt a lot of fear about how I would cope or survive without my grampy’s hugs and strength. I felt weak. There was definitely no normal functioning in this stage.

Zero time in this stage. ‘A’ had disappeared completely and I never felt an ounce of anger.

This is another stage I camped out in, my neighbour was stage 1 and I literally moved from stage 1 to stage 3 to stage 1 back to stage 3 over and over and over for at least 6 years. I was numb, tired and lacked any sort of enjoyment or happiness throughout that time. I was medicated and treated for Anorexia and Bipolar at the same time I was flitting between these two stages.

I never met this stage until 6 years later.

I never reached out to others, I never told my story (anyone new I met over the 6 years I would talk about my grampy as if he was still alive) until I met a guy at the end of the 6 year battle and for some reason I told him about my grampy. That was the first year in 6 years I visited my grampys grave, I spent the 14th April visiting my grampy’s favourite places with this guy telling him about the memories and every year thereafter we did that.

I owe a whole lot to my boyfriend throughout that time because if it wasn’t for him I would probably still be in denial about my grampy’s death. After another 2 years something lifted in me and I felt I accepted that my grampy was gone finally.

Throughout that time I was never treated for bereavement because I had a whole different mess of disasters stirring inside of me. The anorexia, the body dysmorphia and the bipolar. The asshole hitch hiker really did a number on me.

I had two years after that of some normality and at the end of 2015 I had convinced myself that the asshole hitch hiker was a result of not accepting or acknowledging the loss of my grampy and against the doctors wishes I came off my bipolar medication.

Against the doctors wishes meant that if I came off my medication I gave up the help, the support of the mental health team and I was on my own. My mentality at the time was screw them and screw the asshole hitch hiker. I felt it was safe to be able feel again.

Queue the return of ‘A’…drumroll please…