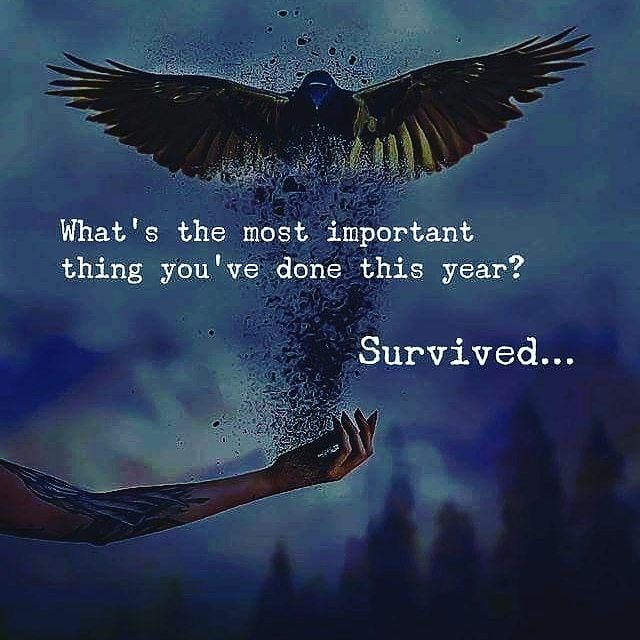 I must of said this like 15 times over the last day and everytime I’ve said it I’ve struggled with the ‘Happy’, it regurgitates inside of me.

I went into 2017 very optimistic, having experienced a pretty difficult, whirlwind 2016; It had some crazy low points but some absolutely breath taking highs too.

I had HOPE, I had POSITIVITY, I had STRENGTH.

Little did I know that mid way through the year would I be at full war world 3 with my hitch hiker ‘A’, the asshole hitch hiker who isn’t worthy of a name (I haven’t published my post on it yet) and a newcomer.

In Jan 2017 I was starting a new job. First job I’d been excited to actually get. I couldn’t believe I got it and they were excited to have me.

ME? Runt of the litter, damaged goods…

I broke up with my boyfriend of four years in 2016 and decided because I had nothing else; no friends and only two people I classed as family (mum and sister), that I would finally throw myself into committing to a career and becoming successful. (Came off my medication end of 2015 so I wasn’t numb or brain fucked anymore…)

For three whole months I was excelling and loving my job and finally felt some happiness after years of feeling like a numb failure.

In April, very suddenly, my mum died. I stood and watched her take her final breaths

I spent the last 10 years looking after my mum in everyway. My life evolved around trying to make my mum happy and she was gone.

I had nothing. I was no-one.

Que the return of ‘A’, the asshole and the newcomer….

Two days after my mum’s funeral I got sacked from my job. I was suffering with Post Traumatic Stress Disorder (the new comer) and they didn’t want me anymore.

The doctors tried to put me back on medication; the flashbacks were crippling me, the anxiety had imprisoned me and the depression had formed a warm blanket around my grief riddled frame. 16 months without medicatiom and I didn’t want to go backwards, i didnt want to be numb.

I wanted to feel every ounce of the pain.

I was prescribed a sedative instead and for the next 5 months I slept and cried myself threw everyday. I had no-one checking up on me so I hid away from the world.

Giving up. Giving in. Retreating.

‘A’ was back in the driving seat, the passenger who directed ‘A’ was grief and I was tied up and gagged in the boot being tormented by PTSD.

I had no money and funeral bills to pay, i was about the lose everything including my home and then something in me clicked…

I got up, i flushed the sedatives and i washed the last 5 months off.

I got a new job. I suddenly didn’t want to lose my home and only source of security so I dug deep and pulled every reserve to the surface.

The mask was on, the ice queen activated.

I went through the motions everyday in this new job either a ball of horrendous anxiety or uncontrollably emotional. Everyday once I was home and safe I praised myself for making it threw another day. Thanking my mum for being by my side.

I now don’t want to go back, I feel nothing for this line of work anymore. I used to love it but it’s so hard to pretend you are ok, pretend you care about your work. I don’t anymore and it’s exhausting.

I feel lost, lonely and afraid

I’ve spent the majority of the year crying. I miss my mum terribly and the thought of 2018 without her makes me feel sick.

Every New Year I always had hope that the year would be great, I would achieve my goals, I would feel happiness.

This year I don’t feel that, I am petrified of 2018. I have no idea what the year has planned for me.

I stand before you – HOPELESS.

My strength is depleted, I have zero resources for another hard year.

The only power I have is my mind. I used to think it was my weakest point, that one day I would crack and break. I should have broke in 2017 but something held me together when everything else was falling apart.

I am a completely different person going into 2018 than I was going into any other year.

I am a survivor.

I’m still fighting through my biggest ‘A’ war yet without any long term medication. (I did use sedatives to avoid what felt like a heart attack and sweat attack all day long! Seriously I’ve never sweated so much, not just my armpits either. Bum cheeks, behind the knees…you name it I sweat from it!!!)

All I know is I won’t go down without a fight.

I will continue to stay as strong as I can and make my mum proud.

I can’t ask anymore of myself.

I feel like I am at a crossroads and I have absolutely no idea which road to take.

One thing I do know? ‘A’ won’t be driving, whichever road I take.

Send me prayers (or maybe weapons)….im going to need them!

Goodluck on your 2018 journeys.